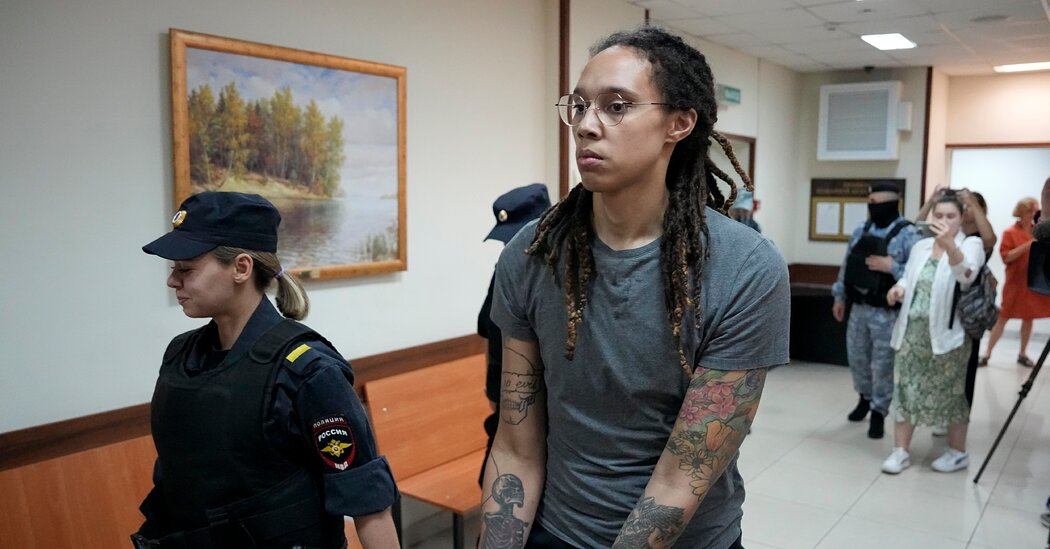 The W.N.B.A. star Brittney Griner’s friends and colleagues expressed support and sadness for her after a Russian court found her guilty of attempting to smuggle illegal narcotics into Russia and sentenced her to nine years in a penal colony.

“Just really feeling sad and feeling sick for Brittney and hoping that she gets home as soon as possible,” said Breanna Stewart, a four-time W.N.B.A. All-Star who had played with Griner on the Russian team UMMC Yekaterinburg since 2020. “Now that the trial is done and the sentencing happened, I know she’s got to be in a very emotional state and just want her to know that we’re still continuing to do whatever we can to get her home.”

Griner has been detained in Russia since Feb. 17, when Russian customs officials at an airport near Moscow said they found hashish oil in vape cartridges in her luggage. Her trial began on July 1 and the conviction had been widely expected. The U.S. State Department has said that Griner is being wrongfully detained and that it has been working to negotiate her release.

Griner’s family has sought help from Bill Richardson, the former New Mexico governor who is working to secure the release of Griner and of Paul Whelan, a former Marine who has been detained in Russia since 2018.

“Today’s sentencing of Brittney Griner was severe by Russian legal standards and goes to prove what we have known all along, that Brittney is being used as a political pawn,” Griner’s agent, Lindsay Kagawa Colas, said on Twitter. “We appreciate and continue to support the efforts of @POTUS and @SecBlinken to get a deal done swiftly to bring Brittney, Paul and all Americans home.”

Moments after the verdict, A’ja Wilson of the Las Vegas Aces tweeted “Free BG!” with an emoji of an orange heart. Dijonai Carrington of the Connecticut Sun tweeted “praying so hard for BG.”

“While we knew it was never the legal process that was going to bring our friend home, today’s verdict is a sobering milestone in the 168-day nightmare being endured by our sister, BG,” the Mercury’s statement said.

The W.N.B.A. players’ union posted a statement on Twitter from its executive director, Terri Carmichael Jackson, which called the verdict “unjust” and urged U.S. officials to do all they can to bring Griner home.

“Given her record of service on and off the court, BG deserves to come home,” the statement said.

It then called on the global sporting community to stand with Griner.

N.B.A. Commissioner Adam Silver and W.N.B.A. Commissioner Cathy Engelbert released a joint statement saying: “The W.N.B.A. and N.B.A.’s commitment to her safe return has not wavered, and it is our hope that we are near the end of this process of finally bringing BG home to the United States.”

Some N.B.A. players weighed in as well.

Nets star Kyrie Irving tweeted: “What is truly happening with our Queen @brittneygriner @POTUS @VP? Please give us an Update.”

Representative Colin Allred, Democrat of Texas, has been working to secure Griner’s release since March.

“Folks must remember that this conviction is all part of a sham trial and Brittney was wrongfully detained,” Allred said on Twitter. “It is just another cynical way for Russia to try and gain leverage.”

Debbie Jackson, Griner’s high school basketball coach, held back tears after learning of Griner’s verdict. Jackson recruited Griner, then a volleyball player, to play basketball at Nimitz High School in Houston, setting her on a path toward stardom on the court.

“It makes me sick that that was the decision,” Jackson said. “I was trying to be optimistic, even fully aware that when you’re dealing with Russia, things don’t go the way you would hope they would.” She said she hoped Griner “can remain hopeful that our State Department will work on a prison swap for her and other Americans that are in prison over there.”