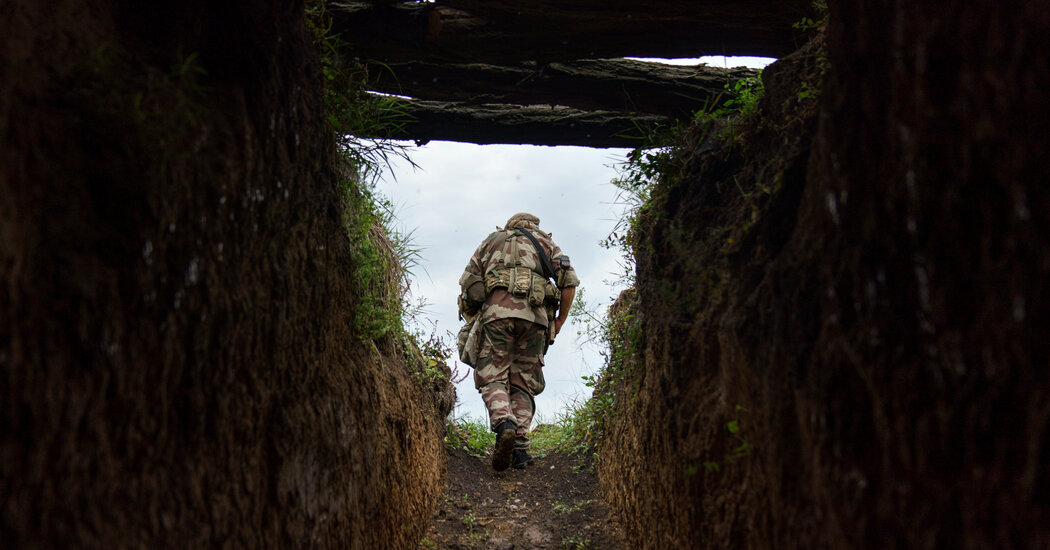 DRUZHKIVKA, Ukraine — Ukrainian officials have been raising alarms for months. The world’s nuclear watchdog agency warned of the extraordinary risks just this week. Then on Friday, artillery duels near a giant nuclear power plant on the Dnipro River in southern Ukraine created new safety risks.

Explosions in and around the Zaporizhzhia nuclear power complex at about 2:30 p.m. destroyed electrical transmission lines and posed risks of damaging the plant, forcing engineers to alter the operation of one of its six reactors by reducing power, Ukraine’s state nuclear company, Energoatom, said.

Hours later, a second series of three explosions damaged an auxiliary building near one of the nuclear reactors, raising the risk of hydrogen leaks and fire, the company said.

President Volodymyr Zelensky and other Ukrainian officials blamed Russia for the attacks.

“This is the largest nuclear power plant on our continent, and any shelling of this facility is an open, brazen crime, an act of terror,” President Volodymyr Zelensky said in his nightly address. “Russia should bear responsibility for the very fact of creating a threat to the nuclear power plant.”

The Russian ministry of defense said it was Ukrainian forces who had shelled the plant, accusing them of an act of “nuclear terrorism.”

No radiation was released after the first explosions, the state nuclear company said. But the forced change in the reactor’s operation underscored the rising danger.

Fighting has intensified in recent weeks near the nuclear complex, which the Russian military controls and is using as a fortress, even as Ukrainian engineers continue to operate it.

For about a month, Russia has used the site to stage artillery strikes on Ukrainian targets without fear of retaliation, since the Ukrainian military cannot fire back without risk of hitting safety equipment, reactors or storage facilities for spent fuel. Ukrainian officials say the Russians aim to disrupt a Ukrainian counteroffensive in the country’s south.

After the explosions on Friday afternoon severed a high-voltage electrical line, the plant operators reduced output from one of the reactors. Previously, three of the six reactors at the plant were operational, two were on standby and one was undergoing planned repairs.

It was not clear if the reactor whose operation was altered on Friday was shifted to a standby status, said Dmytro Orlov, a former plant engineer who is now the mayor of Enerhodar, where the plant is.

“This is an unusual event but not unpredictable,” he said. “Personnel were prepared.” He compared it to the emergency response in the case that an electrical line were damaged by wildfire or another accident.

Energoatom, the state power company, released a statement on the Telegram social networking site saying that Russian artillery fire had severed the electrical line. “The Russian military again resorted to provocation,” the company said. It said an industrial space on the complex’s grounds was struck three times, hitting the wiring and a transformer.

The statement said the operators reduced output and disconnected one reactor from the electrical grid. “Releases of radioactive substances were not recorded,” the statement said.

Hours later, the energy company reported a second attack on Telegram, saying Russians had fired three rocket-propelled grenades that landed near one of the nuclear reactors. The explosions, the statement said, damaged an auxiliary building and a specialized station. “Fire danger is high,” the company said.

The International Atomic Energy Agency said it was aware of the reports and seeking further information about the situation.

Ukrainian officials say they have few options but to endure the Russian bombardments. In July, Ukraine’s military intelligence agency said it had used a precision-guided “kamikaze” drone, which explodes on contact with a target, to destroy a Russian rocket launcher and air defense system located about 150 yards from a reactor, without damaging the reactor itself.

The I.A.E.A. has warned of grave dangers from the plight of the plant. Cornerstones of nuclear safety, it said, are being knocked out from the plant even as it continues operating. Among the shortcomings, it said, are a lack of physical security and regulatory oversight, which is in limbo now.

Those concerns were echoed by Britain’s defense ministry on Friday. In its daily intelligence update, the ministry said that Russian troops “have likely undermined the security” of the plant by using it as a base to “target Ukrainian territory on the western bank of the Dnipro river.”

Fighting around the complex in March had caused a fire that stoked global concerns about a possible nuclear accident.