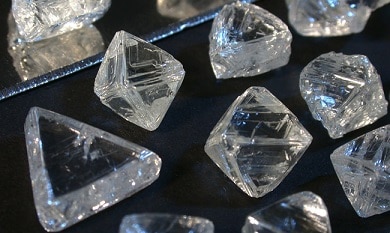 Russia-Ukraine War Impact: The diamond industry of Gujarat has been badly affected due to the Russo-Ukraine war. Due to the war, there has been a serious crisis on the earnings of lakhs of laborers working in this industry. Diamond units working especially in the rural part of Saurashtra region have been most affected by this fight. Industry representatives said that these units import small quantities of diamonds from Russia for processing and polishing.

Due to Ukraine war, livelihood of lakhs of diamond workers in Gujarat is in danger.
Regional Chairman of Gems and Jewelers Export Promotion Council Dinesh Navadia said that about 15 lakh people are employed in the diamond industry of the state. Traders in Gujarat are forced to buy raw materials from African countries and elsewhere due to the short supply of small size rough diamonds from Russia, which is affecting their profits. Therefore, the diamond units of the state have cut down the working hours of their workers and polishers, which has seen an impact on their livelihood.

Big companies sent e-mails saying – will not buy Russian goods
Large size diamonds are mainly processed in the units of Surat city of Gujarat. India exports 70 percent of cut and polished diamonds to the US. After Russia attacked Ukraine, it has banned Russian companies. Navadia said that some big companies in the US have already sent them e-mails saying that they will not buy Russian goods.

There was a bad effect on the diamond laborers of these districts of Gujarat.
Dinesh Navadia said that due to this, diamond workers especially in Bhavnagar, Rajkot, Amreli and Junagadh districts of Saurashtra have been badly affected. Apart from this, it has also affected the workers of the northern part of the state. “We were importing about 27 per cent of the rough diamonds from Russia but due to the war, this quantity is not reaching the processing units in Gujarat, which is affecting the work there.” About 50 per cent of the entire labor force involved in diamond processing in Gujarat works on small-sized diamonds, locally known as ‘patli’.

Before the war, 30 per cent of the rough diamonds imported for polishing in Gujarat came from Alrosa, a Russian diamond mining company. Of the diamonds that come to Gujarat for polishing and processing, 60 per cent come from Russia. Most of these are small size diamonds.

PM Mudra Yojana: 8 years of the scheme completed, the government distributed loan of Rs 8 lakh crore, know what is the scheme