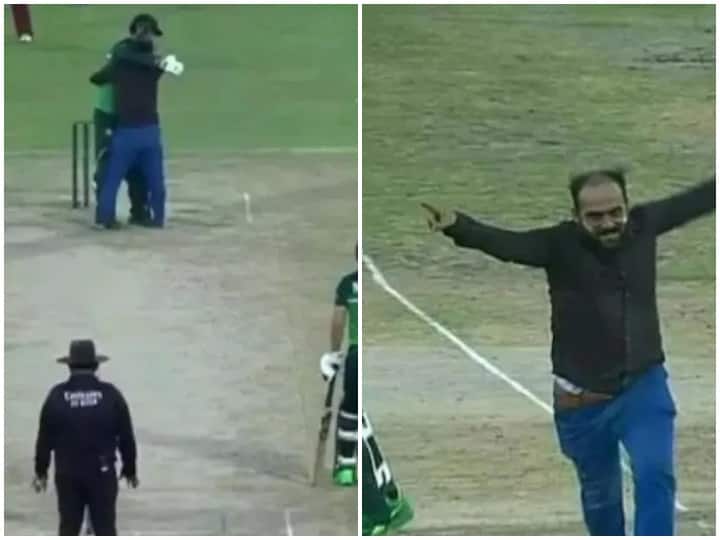 PAK vs WI ODI Series: Pakistan took an unassailable 2-0 lead in the three-match series after registering a win in the second ODI against West Indies. In the second ODI in Multan, Pakistan won by 120 runs. Batting first, Pakistan scored 275 runs in this match. In response, the West Indies team was reduced to just 155 runs. The last match of the series will be played on June 12.

An interesting incident happened on the field during the second ODI. Actually a fan reached the pitch to meet Pakistani cricketer Shadab Khan. The matter is of the 39th over of Pakistan’s innings, Shadab Khan was batting when a fan came running towards him. Shadab was first saluted by this fan, after which Shadab Khan embraced him. The fan looked very happy after hugging his favorite player.

Pakistan captain chose to bat
Babar Azam won the toss and elected to bat first. After losing the wicket of opener Fakhar Zaman (17) early, there was a strong 120-run partnership between Imam-ul-Haq and Babar Azam. Imam got out after scoring 72 runs, while Babar played an innings of 77 runs. Apart from these two, no other Pakistani batsman could stay on the crease for long. Mohammad Rizwan (15), Mohammad Haris (6) and Mohammad Nawaz (3) soon returned to the pavilion. However, the tail batsmen added a few runs to take Pakistan to 275 runs.

Windies were reduced to 155 runs
Chasing the target of 276 runs, West Indies lost their first wicket for four runs. But after this, Kyle Meyers (33) and Shamar Brooks (42) added 67 runs in a flamboyant style. The Windies team was looking strong after making 71 runs for the loss of one wicket in 10 overs at one time. This is where the wicket of Kyle Meyers fell and then one after the other the batsmen started returning to the pavilion. In this way, the entire West Indies team was reduced to just 155 runs. For Pakistan, Nawaz took 4 and Wasim 3, Shadab Khan took 2 and Shaheen Afridi took 1 wicket.

Hardik Pandya expressed his pain, said – no one knows how 6 months passed